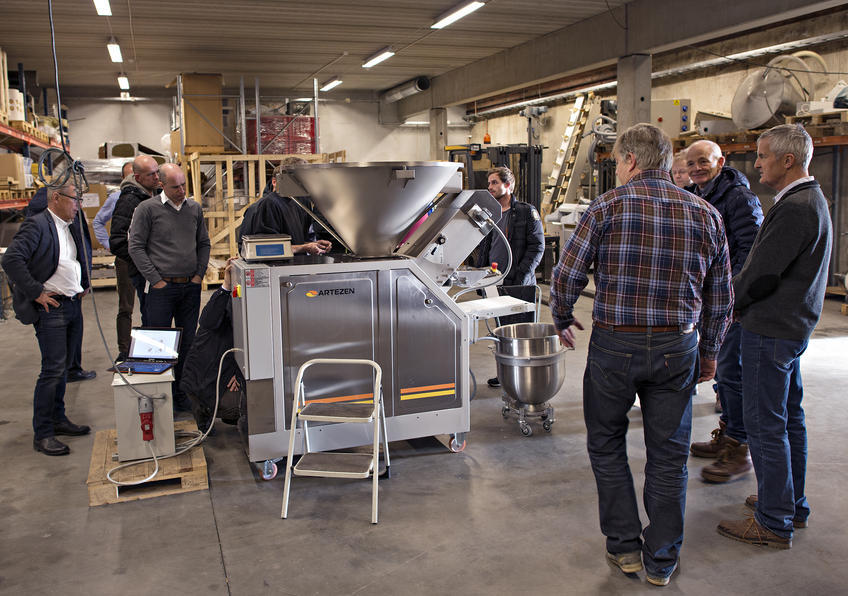 Calybra has taken Norway by storm. And now Artezen's stress- and oil-free divider is conquering the entire Nordic market, as can be seen at the Scandinavian Bakery Fair in Copenhagen (May 22-23). Testimony to its success is the interest shown by the Norwegian bakery magazine Bakeri.net. It is our pleasure to provide you with a translation of their articles:

Fast, oil-free dough divider from Artezen
Horni Baking Technology has received the agency for a heavy duty dough divider from the Italian company Artezen.
By: Jon-Are Berg-Jacobsen - 17 January 2016
The Italian firm has sold dough dividers around the world for 14 years and manufactured just under 1,000 units. The industrial firm from northern Italy has not sold their products in the Scandinavian market earlier, but since the new owners came in last year, one of them from Sweden, they will now enter this market. After its introduction in Scandinavia and other countries the owners expect to double the production of machines during the next two years.
High capacity
The machine has a high capacity but is relatively modest in size. The machine can weigh and divide up 3100 breads per hour. It has a weight range from 50 to 1500 grams as double chamber and from 100 to 2800 grams as a single chamber. The margin of error in weight is guaranteed to a maximum of a few percent.
- The advantage of this equipment is that it is oil-free, saving money and avoiding spills. It operates with high accuracy and is hydraulically driven. The machine can respond to all of the customer's needs and we believe that we are going to sell about 25 units the first two years in the market, says Dag Horni Horni Baketeknikk.

By: Oddbjørn Roksvaag —  19. april 2016
It has been well beyond our expectations, comments  Dag Horni from Horni Baketeknikk on the interest for the new oil free dough divider launched in the Norwegian market earlier this year.

In a short time we had over 10 units sold and we expect to sell 20 to 25 such dough dividers during the year.

- We sold dough dividers since 1978, but never managed to supply so many in such a short time. Usually we sell 5-10 dividers per year. If it continues as it has started, we will sell 20-25 Artezen dough dividers.

- What is the reason for the great interest?
- Since it is oil-free, it provides important savings in expenditures for oil. Many customers are probably economically motivated. In addition to that, there are the low-maintenance and cleaning requirements, as well as the accurate dividing results. Here we hit very well in the market, says Horni, whose model was exhibited at the recent "Din Baker" conference in Verona.

- Though your machine now takes Norway by storm, it isn't new in itself?
- No, it's not. It has sold in over a thousand copies to other countries. It is the first time though that the machine is now sold in the Nordic countries, says Horni.